During five days of the cruise in Kongsfjorden we want to investigate the benthic environment. We will scrape the bottom, collect tons of mud with grabs and corers. Everything will be dirty. We will probably sleep for three or four hours a day. There will be a lot of fun. 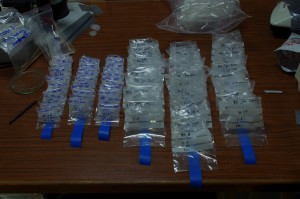 Just a little part of the bags, prepared before the sampling station (Photo by Mikołaj Mazurkiewicz)

But from the beginning. As it is good to be prepared, two days ahead our first sampling station we decided to start preparations of our equipment and all the containers for our samples. It seems trivial and boring, but it is very important to have everything prepared, especially since we had to label hundreds of string bags and tens of jars and buckets. Those last one needs to be labelled three times – on itself, on the cover and on the piece of paper that we put inside. A lot of writing. There would be no time to do this on the station during the sampling procedure.

Now we can start working. We begin with scraping the bottom with a triangle dredge. We are especially interested in rocks 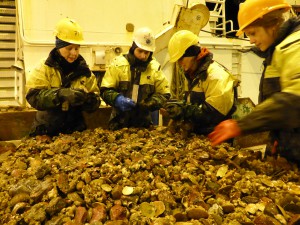 Picking out the rocks collected in the dredge. (Photo by Joanna Legezyńska)

and boulders on which encrusting and calcifying organism like barnacles or bryozoans (moss animals) grow. Three stations with three dredgings at different depths on each. Sometimes the work goes clean and smoothly but sometimes we get a material full of mud and we have to dig in it to find what we are looking for. But this is just a little part of our tasks.

Before I started my oceanographic studies I had supposed that sleds can be used just for fun. Here on Helmer Hanssen we have sleds as well, and they don’t remind regular ones, they are called epibenthic sleds and we use them to collect animals living on and above the bottom. But honestly… it also provides a lot of fun, animals we collect are so numerous and alive. And it is also very clean work – something rare in benthic ecologist job. 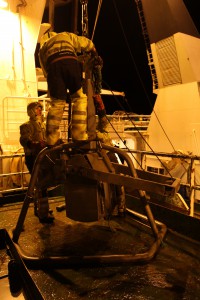 Ok, but what about animals that live in the sediments – the infauna? To collect them we need to collect hundreds of kilograms of mud. We can use a grab and then sieve everything. It’s the easiest ant quite fast procedure but it provides only big animals. Collecting smaller animals or investigating some properties of sediments like content of carbon or chlorophyll concentration in different layers is much more tricky. We need to use a box-corer, a huge and a little scary device that brings on the deck an undisturbed, rectangular piece of sediment. Then let’s put some tubes into it, cover ourselves with mud during digging to pull them out, and finally put them on the extruder. Than we can slice those cores however we like. From each slice we can take subsamples for different analysis. A lot of fun, at least five hours at each station. And then there is no time to rest! All those samples needs to be preserved, string bags with sediments must be closed, packed and stored in the freezer.

Besides collecting samples on the deck, there was also a lot of work under it. Some of the animals that we got with the epibenthic sleds had to be identified alive, and then frozen. Little unpleasant work, but on the other hand it is not so drastic as fixing them with a formalin. These animals will bed analysed for lipid and isotopic content. The result will tell us a lot about the diet of this organisms. Is it different comparing to summer? Do they change their eating preferences? We will see.

Five days passed and we survived. Even after such short time, a persons priorities can change a lot. Usual and ordinary concerns becomes much less important, you don’t think about groceries, paying bills or buying new trendy gadgets that everybody is crazy about. All you worry about is: “Will I find any time to sleep?” and “Will I finish working on the deck before breakfast?”. You do not worry if you are wearing dirty clothes. You don’t care if your t-shirt fits to your trousers, they just must be worm and comfortable. You forget about television, newspapers and even internet goes wayside, especially because the connection is so poor. You realise that earth keeps spinning around though you don’t know what did your friends post on Facebook recently and you didn’t see last news on TV. 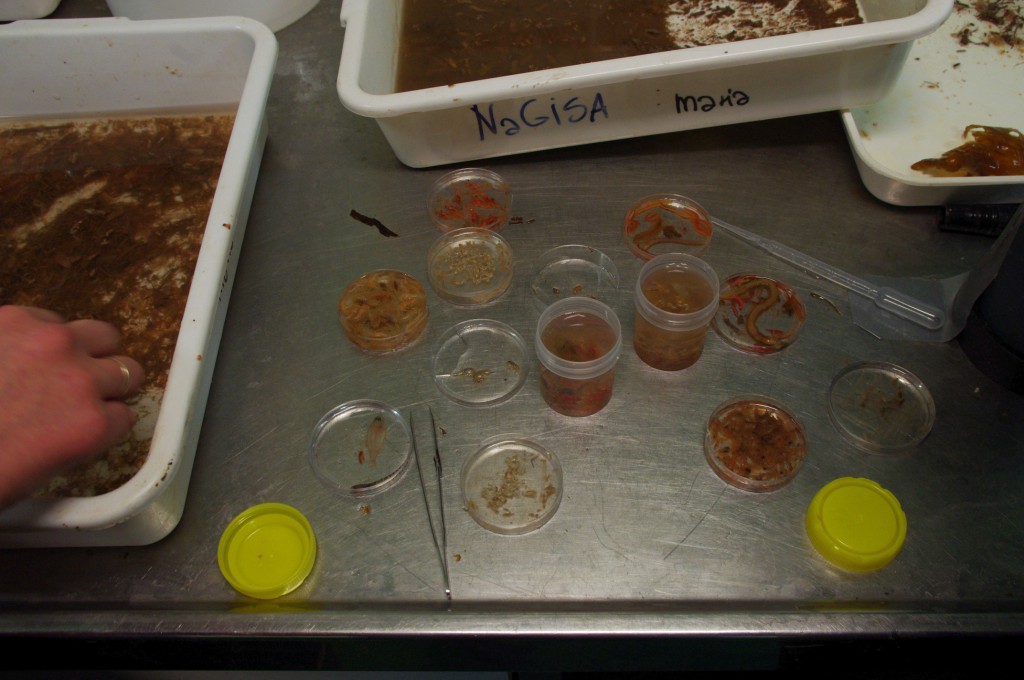 Sorted animals ready for the identification (Photo by Mikołaj Mazurkiewicz)