The King of the Alcs (literal translation of the Norwegian common name “Alkekonge” Alle alle), better known as Little Auk, was of particular interest for a long time during several projects in Svalbard. It also played a major role in the PhD thesis of the author of this random blog entry. During the Marine Night campaigns 2014 and 2015 we also focused on sea birds – most of which spend the dark winter time in more southern latitudes, for understandable reasons. Nevertheless, some of them stay. Now, the question is: Why? Did they just miss the departure time? Stayed at the party too long to realise they would miss the last flight South? Or do they actually stay on purpose, and if so: What could they possibly survive on during the long winter. After all, they are considered visual predators, how do they find prey if they can’t see (or maybe they can)?

To solve this mystery, we obtained permission to shoot 10 individuals of all common sea bird species – both for stomach analysis (what did they eat) but also a variety of other studies. Now, for reasons yet to be discussed, in 2015 we hardly saw any sea birds at all. In total, only 4 specimens were collected. Two of them were little auks. To our surprise, both of them had fairly full stomachs – one had been feeding on krill, the other one on a benthic amphipod. Apparently even during the Polar Night it is possible for sea birds to survive and actively feed. But why do we find so few of them, in particular this year? Well, we don’t know yet, but maybe some went on an expedition to unknown territories… 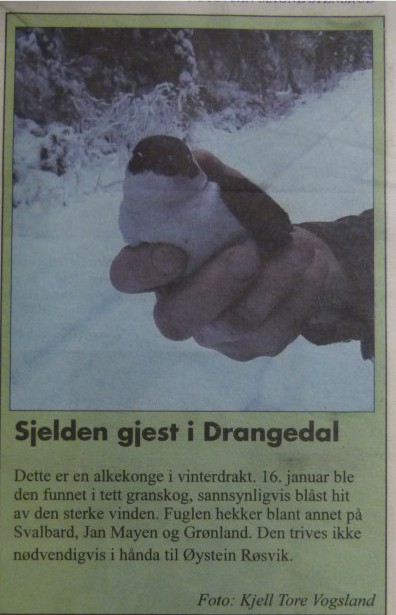 “Unusual guest in Drangedal” – “This is a little auk in winter coat. It was found in a dense forrest on 16 January, probably blown here by the strong winds. The bird is nesting on Svalbard, Jan Mayen and Greenland, among other places. It does not necessarily feel comfortable in Øystein Røsviks hand.” Drangedalsposten 22 January 2015. Drangedal is a small place in Telemark, southern Norway. News provided by Karen Lone.