Polar cods (Boreogadus saida) are the most abundant fish in the Arctic Ocean. They are perfectly adapted to the harsh unstable environments encountered at high latitudes and are believed to be an important link in the arctic marine food web. Their role as a keystone species also makes them a relatively well studied organism. That being said, much about the species ecology remains poorly understood.

My role on this cruise is to attempt to describe what polar cods feed on during the polar nights. More specifically, I am interested in the seasonal variation in polar cod’s diet in the Svalbard region. In order to do so, I must examine polar cod’s stomach content and identify the organisms they’ve ingested. This of course, involves in a first instance… Catching the polar cods themselves! This may seem a piece of cake when having the opportunity to board a ship such as the Helmer Hanssen equipped with trawling equipment, small mesh nets, and echo-sounder, but let us not be fooled. Chasing polar cod can often be a frustrating fruitless experience. Granted polar cods will most likely occur in “Arctic regions” (eg. Sill fjords, or fjords north of Svalbard) as opposed to “Atlantic regions” (fjords on the west coast of Svalbard) but they do sometimes occur in fjords influenced by Atlantic water inflow.

On this trip we will only visit fjords that are strongly influenced by the inflow of Atlantic water. In fact, most of our sampling will occur in Kongsfjorden on the west coast of Svalbard. Our first trawl was scheduled for Thursday the 8th at 2:15AM inside Isfjorden, right out of Longyearbyen. Although we got quite a number of fish, particularly atlantic cod, the polar cod catch was rather meagre (2 juveniles). We did have however quite a diversity of organisms in this trawl (including a number of benthic organisms) and spent a few hours sorting, identifying, measuring, and weighing. Paul Renaud helped us a great deal identifying the invertebrates and as always, the small spiny Parampithae hystrix was the mascot. The atlantic cod were surprisingly small. Carl froze the few skates, flatfish, and snail fish that we caught for further analysis. Pandalus borealis were dominating the catch in abundance with 262 of them caught in this trawl.

Even if there are no polar cods for me to analyze, a trawl does not go to waste. There are a number of projects on fish that will all claim a given part of the trawl content. Ultimately, all organisms (fish and invertebrates) will be processed and the resulting data will go towards a broader fish project taking advantage of any trawl happening on this cruise.

We are still at sea at the moment, sampling for zooplankton not far from the sea ice. The next trawls are scheduled for Kongsfjorden. Kongsfjorden, the fjord in which we destroyed the net in the past cruise when it got stuck in mud near the glacier. Hopefully, this time, mud won’t be at the rendez-vous and polar cods will be around. 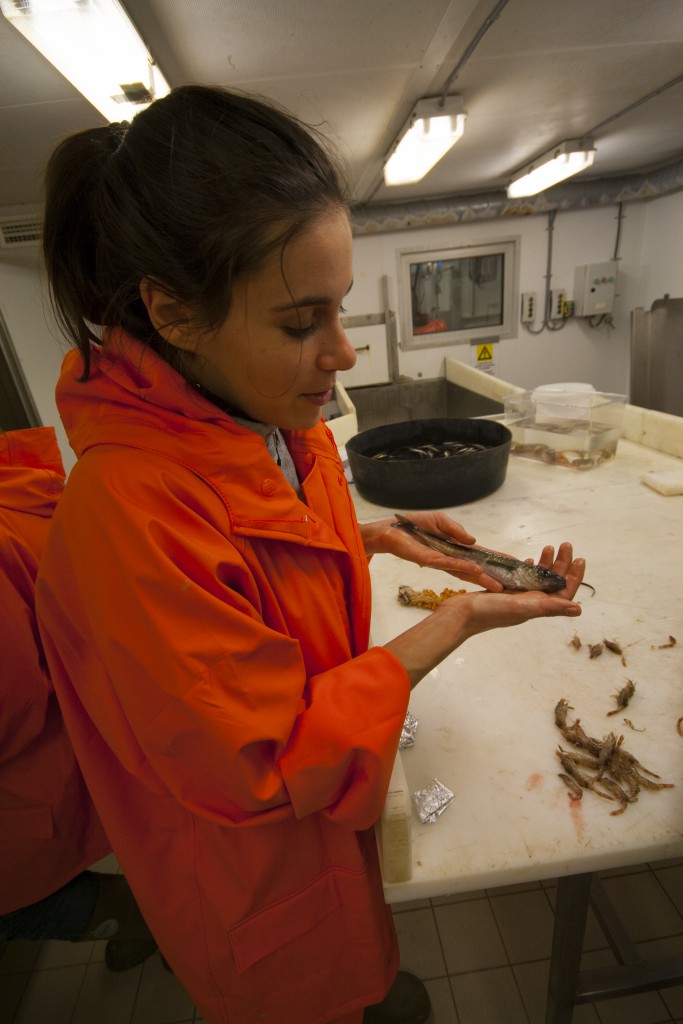